positives of running for weight loss

Many of our members have joined us with the goal of losing weight & this article  features three of our biggest achievers in this department explaining how running has helped them transform their lives for the better.

IAN HONEYFIELD joined us just over a year ago having taken up running to be healthier by losing weight & regain his self esteem. He (rightly) believed that running would be the quickest way to do this & not only has he lost 3 & a half stone he has become a very handy runner in the process.

Exactly 1 year to the day after Ian took up the sport he finished 2nd in the Northampton parkrun (a free weekly 5k run for all abilities held at Northampton Racecourse) in a PB of 18.05. He has also ran many other road races including half marathons & this past June he was part of PJR’s winning team at Endure 24 (a non stop 24 hour relay race) where he completed 7x 5 mile laps (35 miles) in the 24 hour period.

Ian puts his weight loss & dramatic improvement in running down to consistency both in exercise & diet & says the main benefits have been an increase in self confidence & now having the belief in achieving anything he puts his mind to. 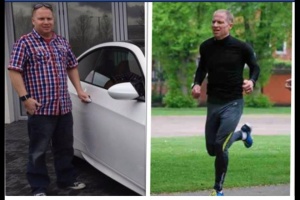 LEE CHILVERS has been with us for around 2 years & his now lean, athletic figure makes him almost unrecognisable from the guy who joined us after being diagnosed with type 2 diabetes wanting to run in order to lose weight for a better quality of life.

2 years on & 4 & a half stone lighter Lee has reached his goal of running a sub 1 hour 10k & is ready to take on the half marathon distance!

Lee puts his weight loss down to a combination of a change in lifestyle, diet & exercise through running & says he was motivated to do it by setting himself that ambitious yet achievable sub 60 min/ 10k goal.

As well as becoming a stronger runner Lee puts down the benefits of losing weight to being more confident, having more energy & getting himself a girlfriend. 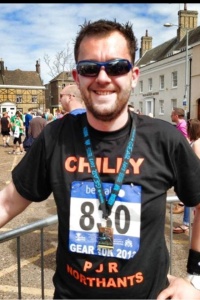 DAVID WEIGHILL has dropped from 18 & a half stone to just over 13 stone since taking up running! He has changed his diet & kicked his 40 a day smoking habit but puts his 5+ stone loss mainly down to getting out & doing exercise to feel good about himself.

David’s motivation has been the desire to do local running races, something he is now striving on having recently completed the Northampton half marathon, his first cross country race & attending the Northampton parkrun 5k almost every Saturday. He is also about to take on his first Obstacle course race & has entered a full marathon in April 2014.

David’s huge lifestyle transition has been widely recognised as he won both the town & county rounds of the sports awards in the ‘get active’ category.

David at the Northamptonshire sports awards

So, if you are wanting to lose some weight whether it be a couple of pounds or several stones then why not take up running. PJR are here to help!

1 Response to positives of running for weight loss